History of the Memorial

The Beginnings of the Memorial

The task of writing the history of the Guilford County Veterans Memorial, dedicated on September 14, 2002 would have been a daunting task if left to memory of the few members of the original committee who are still alive. Fortunately, one of the original members; Nathan B. (Ned) Harrison who wrote for the Greensboro News & Record published an account in great detail as to how this Memorial came to be. Ned’s article was published in the People & Places section of the News & Record on September 8, 2002 just weeks before the dedication. Most of the information on this page comes from the article by Ned and he should certainly be credited for this historical perspective. The title of Ned’s article was “Finally, a monument.” Ned elaborated that it had been 55 years since the end of WWII and there was no monument in Guilford County to recognize those who served or contributed to our war effort during WWII or the many military actions since that time.

The People Who Made it Happen 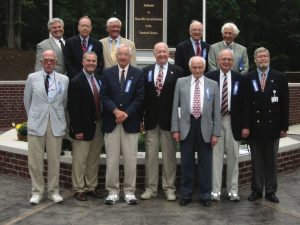 The effort to create a Memorial started with B. Thomas Ward in June of 2000. Ward had the idea of building a memorial to “recognize those in our community who paid the supreme price to preserve our liberty and freedom.” Tom’s original idea was to have a memorial in Latham Park. Tom, an Army veteran, knew that he would have to enlist a strong community leader to make this happen. He reached out to William F. “Bill” Craft, a Coast Guard veteran to ramrod the effort. Bill began reaching out to veterans who would serve on the memorial committee or advise in matters of historical accuracy, architecture and design, construction and finances. The following people served on the founding memorial committee:

The Community Foundation of Greater Greensboro agreed to handle the money and continues to handle the memorial funds. Moser Mayer Phoenix Associates was chosen for the design and Cockerham Construction Company  (Board member Walt Cockerham) did the build. Board members worked with the design and construction team to determine the final design plans. 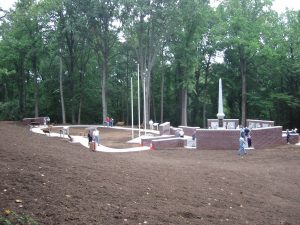 Choosing the right location for the monument involved discussions recommending several locations but quickly ended with agreement of Country Park in Greensboro, the site of the 1781 battlefield during the Revolutionary War known as “The Battle of Guilford Courthouse.” This Memorial was to be a county-wide effort and included High Point and Guilford County as well.  Both the City of High Point and Guilford County were very supportive and contributed financially as well.

Of course funding was also a major issue with an estimated cost of $500,000 needed to create the memorial. Many philanthropic and civic organizations contributed but it was the Tannenbaum-Sternberger Foundation that wrote the first check and opened the door for funding success. One hundred twenty-eight people wanted to be charter members in this effort and contributed $1,000 or more to the cause. Memorial bricks were sold and placed at the memorial as another source of funding. Initially there were 360 bricks ordered and that has grown substantially over the years.

The original concept of the memorial was to cover the military actions of the 20thcentury beginning with the Spanish-American War and ending with the 1999 air campaign in conjunction with the United Nations to stop the Serbian atrocities and ethnic cleansing. That concept has changed over the years and the Memorial now recognizes, honors and supports those who have served in Afghanistan, Iraq, Somalia and other US military actions in the 21stcentury.

There have been a number of improvements to the Memorial since it was originally dedicated to include a pavilion and another brick wall that further defines the Memorial property.